The GAAD, a collaborative effort of Mitra Jyothi, Prakat Solutions and Rotary Koramangala was a
day that saw a culmination of voices, thoughts, approaches and solutions and an increased
awareness of challenges faced by people with disabilities (PWD). A video that brought to us the
perspectives of various PWD and their challenges was followed by a panel discussion in two
parts where eminent panelists from diverse backgrounds spoke about the various approaches,
challenges and stories of innovative solutions in the field of Accessibility.
The event opened with the lighting of lamp by Major Singh and Madam Uma of Mitra Jyothi.
Following this, the tone of the event was set by Ms. Madhuji Singhal, Founder of Mitra Jyothi, by
stressing that Accessibility is not something achievable by a few, but each person has to play
their part to make it a reality. 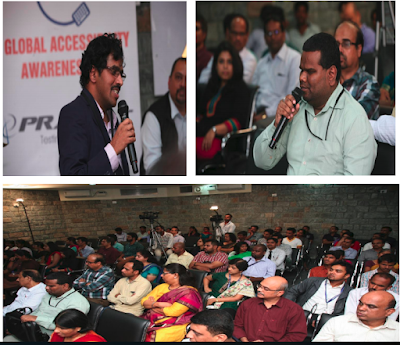 Mrs. Anuradha Biswas, Founder of Prakat Solutions, gave us the background behind the GAAD:
The idea of a GAAD started with a single blog post written by a Los Angeles-based web
developer, Joe Devon. Jennison Asuncion, an Accessibility professional from Toronto discovered
Joe’s blog post purely by accident thanks to Twitter. After reading it, he immediately contacted
Joe and they joined forces, leveraging their extensive and respective networks to realize the
event.
She invited the audience to put on their thinking hats and pitch in with ideas, thoughts and
questions.
The diverse audience comprised of several professionals from Intuit, Oracle, Wipro, IBM etc.,
developers, designers and testers, besides people with disabilities and those from NGOs.

GAAD video presentation:
The session began with an eye-opening video that educated and sensitized us about what
accessibility is and why there is such a pressing need for it by bringing to us the perspectives of
people who faced several different types of disabilities. They spoke about the challenges they face
as they navigate the digital world- something that we take entirely for granted.
The statistics are actually quite shocking- 9 out of 10 websites are not accessible. A large number
if services and products online are not available to PWD due to the lack of awareness on the part
of corporates, developers, designers etc. We also got a peek into the various types of assistive
technologies and the many tools available to compensate for any limitations a user may have.

The panel discussion happened in two parts, the first one was moderated by Anu Biswas,
Founder & CEO, Prakat Solutions who was joined by Madhu Singhal, Founder & Managing
Trustee, Mitra Jyothi, Vishwajit Aklecha, Product Architect behind Intuit’s QuickBooks and
Srinivasu Chakravarthula, CEO, Informatica.
Srinivasu, spoke about the two types of enterprises, based on their approach to accessibility- the
proactive and the reactive. The proactive take initiative and make their products and services
accessible, (perhaps because the leadership is passionate about the cause) while the reactive
come to understand the importance of accessibility either through a lawsuit or the threat of one.
He gave the example of Apple, which although started out as reactive, pledged to incorporate
accessibility into the design of every Apple device thereafter, and indeed, today we see that every
Apple device comes with a complete accessibility suite. He stressed that awareness and
sensitization could convert the reactive to become proactive.
It is important to focus on accessibility earlier on in the process. This would be much easier and
cost effective than the alternative approach of converting existing products phase-wise, to make
them accessible.

Another important aspect he highlighted was the fact that awareness about accessibility should
also come to developers through education and training. 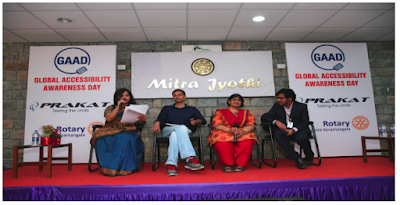 Vishwajit, answering the question as to what could influence product companies to integrate
accessibility into their processes and design, shared the story of Quickbooks, an accounting
ecosystem by Intuit. When he heard from visually challenged individuals who were using the
software and said that they could not even select the date on the software, that is when he started
the initiative to test the accessibility of the product and partnered with the visually challenged in
making the tool accessible. This initiative was made possible by convincing stakeholders that it is
not always about the numbers. And sure enough, the next release of QuickBooks in 2013, met a
lot of appreciation for being accessible and inclusive. He said that this brought a lot of hope and
motivation for users.
Madhuji, who has been an inspiration for the founders at Prakat, spoke about how any design
should take accessibility into account in the earlier stages. She pointed out that many designs that
meant to be accessible are not actually so in practice. She gave the example of a cane for the
visually challenged that she had recently come across that was so heavy that it was not at all
practical!
She highlighted simple examples from her own life- how when she gets an invite to an event in
.jpeg format, she has to wait for a sighted person to show up and read the details to her. If I could
only do my own work without depending on others, that would make me so happy, she said.
Roads, public transport and the lack of accessible toilets, all pose safety threats and hinder the
everyday lives of people with disabilities. She stressed on the importance of persisting and
continuing to highlight issues to the Government and to technology professionals who would be
able to bring about a change.
Petition to make Karnataka Govt. websites accessible:
Abhik Biswas, President, Rotary Koramangala and Co-founder and Principal, Tech & Dev, Prakat
Solutions, gave us a brief introduction to the work done by Rotary and their collaborative effort
with the government and other organizations in virtually eradicating polio.
He spoke about Prakat’s initiative, a report on the state of 105 Karnataka Government websites.
The report found that only eight of them were accessible. He invited the members of the audience
to sign the petition to the Karnataka Government to make their websites accessible and also
bring a surveillance mechanism in place to keep the sites honest and accessible to all.

The second part of the panel discussion was moderated by Abhik and joined by Ms. Shanthi
Raghavan, CEO, Enable India, Dr. Nandakumar Ramakrishnan, EBay and Abhinav Kumar,
Managing Consultant, Wipro.
Abhinav shared the story of Wipro’s Accessibility practice, which involved making wipro.com,
and all of its internal applications used by 170,000+ employees worldwide, completely
accessible. He spoke about their initiative of forming a forum for employees with special needs
where they can voice their perspectives. People highlighted all sorts of challenges, for example,
one visually challenged person highlighted that the even to view details on something as
confidential as their payslips, they would need the help of a sighted colleague.
Shanti gave several examples to her point that features designed for the benefit of people with
disabilities do in fact end up benefiting everyone. The vibrate mode on phones, subtitles for
audiovisuals, etc., initially designed for the hearing impaired have become universally useful
today. Most importantly, she gave us two cases of accessibility innovations that helped not just
the visually challenged but also the society at large. 1. Car dealerships facing high attrition in
their after sales support teams, made their internal applications accessible to leverage over one
lakh potential candidates who were visually challenged. Not only did the visually challenged
benefit from the employment, but so did the car dealership. 2. After analyzing jobs that could be
available for visually challenged in SBI, it was found that they could take on the role of Passbook
printing. The only change the bank needed to make was add the account number in barcode

format on passbooks, which benefited not just the visually challenged but also ensured error free
number entry for other employees.
Dr. Nandakumar spoke about the importance of ‘left-shifting’ our accessibility practice that is to
incorporate accessibility earlier in the lifecycle. A simple observation he made was that we rarely
go to banks these days due to the advent of online and mobile banking. But in some decades,
when we grow old, we might face one or the other type of age related disability, which might
make these modes of banking inaccessible to us. It would not be possible to invest in changing
decades’ of code then. He stressed that enabling accessibility adds to cost only when it is an
afterthought, not when it is thought of in the initial stages of product design. He also spoke of the
need to make innovations in accessibility open source, as they would benefit the entire
community. 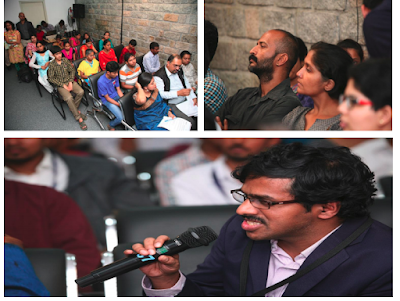 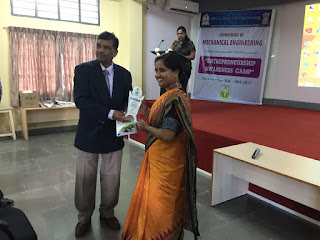